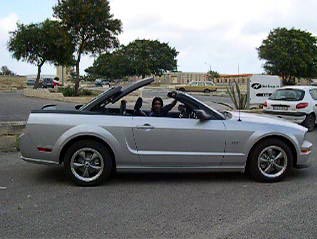 Still Internet hearsay at this point, but word on the street has Ford working on a Mustang hardtop convertible for 2009. They already have the standard coupe and ragtop open-air editions, so why not add a retractable hardtop to the mix? After all, Ford isn’t doing all that well these days and their biggest saving grace is the Mustang, which continues to sell like hotcakes.

They’ve already worked on a Cabriolet version of the Focus Coupe, so it wouldn’t be that difficult to implement the same kind of technology into the hotter selling pony car. The people over at Classic Design Concepts have already outfitted a 2006 ‘Stang with a panoramic Glassback roof conversion, videos of which you can watch with it going up, and going down.

The problem with the retractable hardtop, however, is that the Mustang would effectively lose its back seat when the roof is tucked away in open-air mode. But hey, it’s a sports car; you shouldn’t be driving around with a full load of people all the time anyways.