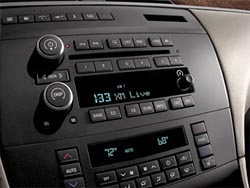 My economics degree would tell me that this doesn’t make much sense. General Motors claims that they are selling a huge number of XM radios in their cars, yet they have decided to lower the price of the option by 39% in their 2007 vehicles.

The radios will fall from $325 to $199 and will be available standard or as an option in about 90% of their 2007 model year vehicles. The company says that they are able to lower the prices so dramatically because economies of scale and engineering efficiencies (whatever those are) have created savings that they are able to pass along to consumers. You would figure, though, that a company that is dying a slow financial death would take advantage of any market success they were having.

GM has now produced more than 4 million vehicles since 2001 with XM radios on board, which is more than all other makers combined.