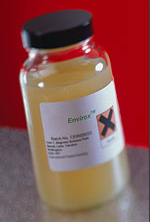 Lest alternative fuels get all the attention, here’s a little item on diesel.

Seems a British company specializing in nanotechnology makes an additive for diesel fuel that increases gas mileage by up to 10 percent, reduced nitrogen-based emissions, and sweetens the smell a bit. The company name is Oxonica, and the product is called Envirox.

The product has at its roots cerium oxide, which modifies an engine’s combustion profile by lowering the temperature at which carbon combusts. The result is cleaner, more efficient fuel.

A British tour bus company already uses Envirox, as does a passenger group in the Philippines. Other companies are expected to follow soon enough, including Turkey’s Petrol Ofisi, which has committed to start using Envirox in the next few months.