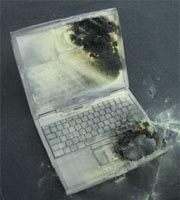 Dell is living a nightmare because of their recall of more than 4 million laptop batteries, but they may not be alone in the problem. The batteries which burst into flames and caused this whole problem were made by Sony, and Dell is not the only maker to use those cells. The U.S. Consumer Product Safety Commission is launching an investigation of all Sony laptop batteries made between April 2004 and June of this year.

Not surprisingly, pretty much everyone involved is on the defensive. Sony claims that the Dell batteries are the only ones with the problems. Other makers who use the batteries are taking measures of their own.

Apple has launched their own investigation, while HP has said loudly and publicly that this is clearly a Dell issue. Lenovo has stated that they have not seen any problems with their own machines. It seems odd that Sony only screwed up on Dell batteries, but that’s what everyone would have you believe.