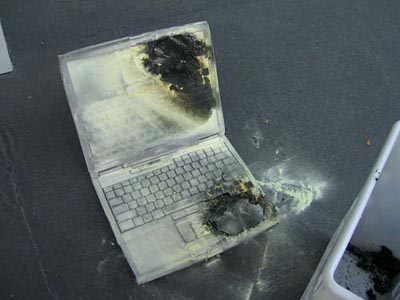 I don’t care if they say that any publicity is good publicity, this is not the way you want to make front page news. After several reports of laptops getting ultra hot and even exploding, Dell has finally issued a huge recall on the culprit: faulty batteries. In fact, they’re recalling 4.1 million notebook batteries that could be affected.

This is the largest recall in Dell history, and some are saying that it might even be the biggest recall in consumer electronics history; that’s no small feat. Apparently, the faulty batteries were manufactured by Sony, and were plunked into certain Latitude, Inspiron, XPS, and Precision models between April 2004 and July 2006. During that time, a full 18% of units sold, according to Dell, were issued faulty batteries.

The problem is so widespread that Dell has even set up a special website — Dell Battery Program — where you can find information regarding affected models and how to get a replacement battery.