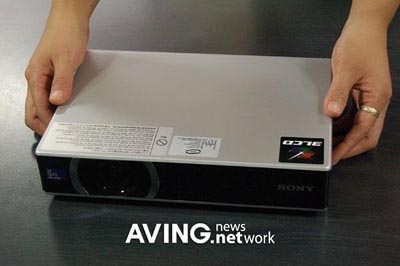 Gone are the days when you’d need to lug around a big honking thing in order to make a sales presentation on the go, or share an impromptu video with some co-workers in the board room. LCD projectors are, like many other electronics these days, getting smaller and smaller; one of the most portable units is the VPL-CX21 from Sony Korea. Winner of the 2006 iF design award, this portable LCD projector weighs in at a mere 1.9 kilograms and has dimensions similar to an ultra-compact laptop.

The image projected will be big, bright, and quite clear, as the Sony VPL-CX21 features a brightness rating of 2100 Ansi and the ability to project at XGA (1024 x 768 pixels) resolution.

One of the biggest selling points of this device is what they call “Off and Go.” Typically, after turning of a projector, you need to give it time to properly cool before you can pack it in for the day. This unit, however, doesn’t need that. After you’re done showing your latest home movie, PowerPoint presentation, or Flash animation, you can simply shut ‘er off and pack ‘er up. This is because the VPL-CX21 comes with a continuous cooling fan. There’s also no separate lens cover; it’s built-in.