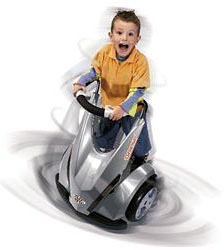 The Segway hasn’t quite made as big an impact as we were originally expecting, back when it was still a super secretive project that was only known as “Ginger.” Earlier this week, we heard about the release of two new scooters, one that you can turn simply by leaning and the other with off-road capabilities, but what else have they got up their sleeve?

Granted, the Dareway probably isn’t an official “Segway” product, but its stand-up, two-wheeling appeal certainly screams of the better known brand. The difference? This one’s marketed to children 3 years and up. In many ways, it’s basically just a toy, never intended to be used for transportation purposes. In fact, you aren’t supposed to use these on public roads whatsoever, reserving your Dareway exploits to private property (preferably your own).

It’s not as high-tech as the Segway — the Dareway lacks gyroscopes or anything like that — but just look at the expression on that kid’s face. Yup, he’s having fun. No word on pricing, but for the time being, the Dareway is a UK-only release.