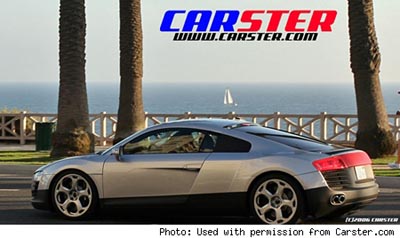 We’ve heard about this car for some time now, but this is the first time that the Audi R8 has been spotted out on public streets. Ryan Porter of Carster caught a glimpse of the Lambo-esque coupe outside his office in Santa Monica and couldn’t help but snap a pic or two.

The wheels scream Gallardo, but ask anyone at Audi, and they’ll tell you that it’s a completely unique vehicle. Whatever the case may be, this car is simply gorgeous and I’m absolutely certain that it will go like stink, even if it doesn’t boast the same 1001 hp as the Bugatti Veyron.

Several industry pundits believe that the Audi R8 will be powered by the same V10 as that found in the Lamborghini Gallardo, though it is rumored that the production model will downgrade to a V8 in an effort not to cannibalize their sales.

Looking down the road, Audi also appears to be planning a drop-top convertible version of the R8, with that launch coming some time in 2008. Now we just need to wait on a spy pic to, er, “confirm” that rumor.