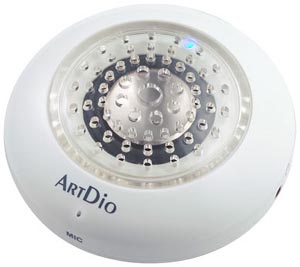 VoIP is all well and good, but sometimes you don’t want to deal with the tangles of a wired headset. Maybe you want to keep your hands free to bash away at the keyboard, or other people in the room want to get in on the conversation as well. Whatever the case, if you’re in the market for a VoIP speakerphone but don’t want to break the bank doing it, the good people at ArtDio have just the thing for you: their unit is priced at less than thirty bucks.

Sure, you won’t get all those bells and whistles that come with more expensive units — like the dual-array mics and stylish design found in Logitech’s $100 solution — but bear in mind that you are saving mundo bucks by going with ArtDio. And hey, it’s still got echo cancellation and noise suppression, so it’s not completely lacking in features.

In fact, the $29.95 ArtDio VoIP speakerphone can even blast out your tunes when you’re not on the line, pausing the music when a call does come in.