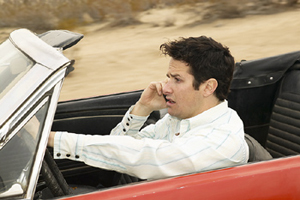 You have to wonder who pays for all these studies. In the same vein of reports that link overeating to gaining weight comes a report from an American psychologist who says that drivers who talk on their mobiles while navigating through traffic are more prone to hazards than their non-yakking road companions.

OK, so it’s a little more complicated than that, but not very. Here’s the scoop: Lab studies of 500 adults who sat hooked up to driving machines while chatting away on mobile phones have shown that these drivers will look at things but not really see them in order to react.

Specifically, one of these studies showed that talking on the mobile slices in half the activity in the part of the brain that is needed for noticing traffic conditions. Another study found that drivers would see things but not remember them, because they were focusing on their phone conversation instead. Yet another study found that (surprise) emotional conversations tended to make drivers even less aware of their surroundings.

This might sound like something that we all kind of know, but it bears repeating because a full 8 percent of accidents each year in the U.S. are directly attributable to mobile phone “distractions.” That might not sound like much, until you figure that the number of accidents in the U.S. each year numbers in the hundreds of thousands.

Bottom line: Go back to listening to the news, your tunes, or Car Talk on the radio. As Tom and Ray Magliozzi would say, “Drive now, talk later.”