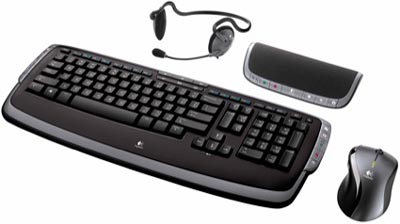 People who are starting to use VoIP, especially if they aren’t particularly comfortable with technology, are going to be buying several different accessories anyway, so Logitech has logically designed to sell them all together in one package: the EasyCall Desktop.

In addition to the trio of products they announced earlier today, the EasyCall Desktop from Logitech includes a laser mouse, a cordless keyboard, a headset and a speakerphone. All of them are designed so that they will not only work together, but look good doing it.

The speakerphone, which has a wire, doubles as an internet calling control center and features Logitech’s RightSound echo cancellation technology. That way, you can talk on a VoIP phone without sounding like you are underwater… in a tunnel. The headset is also wired, probably as much to keep the cost of the package down as anything.

The EasyCall Desktop will be ship in the middle of September in both the U.S and Europe in the range of US$130 and 130 euros. Oddly, the European keyboard will be Skype specific, but the American keyboard will not.