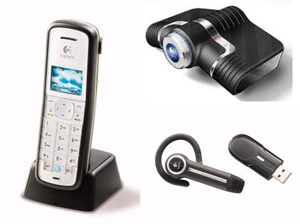 VoIP is certainly the name of the game these days at Logitech. The electronics accessories company has released a trio of new products aimed at making VoIP phone calls more convenient.

The QuickCall USB Speakerphone for Internet Calling looks like it should have a mini-Darth Vader inside. It does, however, pack a dual-microphone system, one on either wing, for greater reception throughout a room. The company also insists that it can eliminate the echoes that are normally associated with the close-quarters necessities of a speaker and microphone in such a small device. The USB power source makes it ideal for laptops.

Speaking of portable USB, there’s also the Cordless Headset for PC and Mobile Phones, which can work on either a PC or a mobile phone. The receiver is the part that plugs into the USB port, and the Bluetooth functionality has a range of 30 feet and a handy call/hang up button right on it, so you don’t need to run to the PC every time you want to make or take a call.

If you prefer a slightly less mobile calling experience, you might look to the Cordless Internet Handset, which gives you (a somewhat ridiculous-sounding) range of 164 feet. The handset has built-in Skype capabilities and a hands-free option. Oh, USB is included here too, as the connecting point between the charging cradle and your PC. (Sounds like you might need a hub ….)