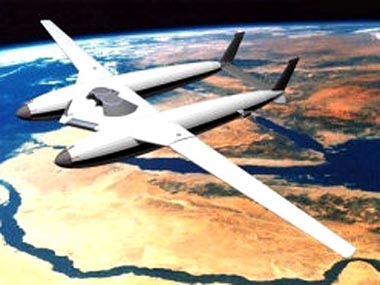 Okay, so it all seems theoretical at this point (the video provided below does a lot of explaining, but only through a computer animated model, and not a “live demonstration”), but I’d say it’s pretty frigin’ cool. Here is an aircraft that exploits the properties of gravity and buoyancy to achieve cruising altitude, using only compressed gas as thrust.

For the descent, pneumatic motors pull in atmospheric air and compress it into the zepellin-like structures. This compressed air surrounds the helium tanks, and after a certain amount is stored, the plane becomes heavier than air once more, and the descent begins as the gravity plane becomes a “glider” with aerodynamic lift, travelling for up to 600 miles.

Interestingly, the compressed air can still be released mid-glide, and the gravity plane can become lighter than air again, regaining altitude. In theory, this process could be repeated again and again to achieve greater distances.