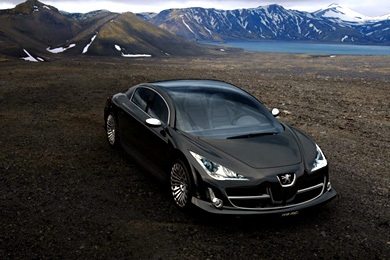 When I hear the name “Peugeot”, I think of super fuel efficient econoboxes swirling around the tight city streets of Europe. I may turn my attention to the splash that the company makes at those crazy rally races. I’ve never associated Peugeot with a full-sized sedan sporting a “monstrous” engine and an ultra-luxurious interior, but that’s exactly how I would describe the new 908 RC.

Still a concept vehicle at this point, the Peugeot 908 RC is destined to make an appearance at the Paris Auto Show next month, where it will certainly cause a few dropped jaws. Let me tell you, this car is going to be quick.

They’ve shoved a massive V12 engine in there, capable of developing 700 horsepower and 885 lbs-ft of torque. Not quite up to snuff with the million dollar Bugatti Veyron, but I’m quite certain it’ll be more affordable.