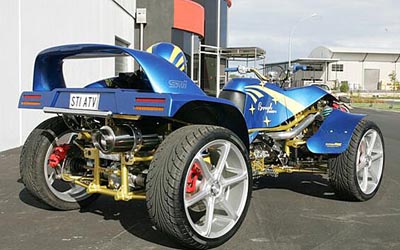 If you thought the people from Australia were a little nuts when they created the Elfin MS8 Streamliner, wait until you check out this creation. For this edition of Mobile Mag, we head over to New Zealand to find Ken Brough, the proud creator of the Subaru Impreza STi-based quad bike. Yes, an ATV with a 230hp turbo powerplant.

In true Subaru fashion, it’s got a flat four engine, and as it weighs a “mere” 530kg, the power-to-weight ratio is 434hp per tonne. That’s more than double what a normal Subaru is capable of (bearing in mind all the extra tiddly-winks involved in creating a car).

When asked why he would create such a monster of an ATV, Brough simply replied, “Why not?” I like your reasoning, Ken, yes I do.

At this time, the STi-powered ATV is one of a kind, but Brough says that he’s thinking about making a few more so that the rest of us can enjoy his “awesomely quick” four-wheel-drive ATV madness. It can even do wheelies.