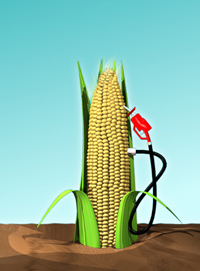 Corn isn’t the answer to all of the world’s problems, at least for ethanol. That’s the message of many scientists and businesspeople, who worry that the rush to the vegetable as a basis for alternative automobile fuel will create false hope for a “wonder drug” for today’s petroleum woes.

A recent report from a Swiss bank questioned the viability of both corn and ethanol in the near future because of a lack of viable land and a yet-to-be-confirmed market for ethanol byproducts.

First of all, most corn is grown for food nowadays, for both humans and animals. A rush to planting thousands of acres of corn solely for energy use might result in the damaging of an already fragile relationship with the land that many farmers, especially in the U.S., now have. Switching food-based crops to energy-based crops might endanger food supply as well, especially if the world population continues to grow at the alarming rate that it is now.

Then there is the tremendous load of byproducts from corn-based ethanol production, which have to be disposed of in some safe way. It’s not much of a problem now because that sort of production isn’t being practiced on a large scale; a large shift to ethanol production, though, would necessitate allocating resources to collection and disposal of these byproducts, resulting in a reduction in overall effectiveness of corn production and perhaps even creating an ethanol-only field or farm, on which only fuel-based crops can be grown from then on.

It doesn’t help matters, either, now that the U.S. Government has gotten wind of the idea. A pair of research centers are on the fast track for being built, in order to further study the issue. Biofuels might seem to be a quick fix for what ails the transportation industry, but they also carry risks and unforeseen costs—namely, that they are more expensive to produce and transport and will continue to be so for years to come.

What does it all mean? Just this: Corn is not the magical bullet, according to a growing number of scientists and environmentalists and businesses. It is one option, yes, for making a dent in the tremendous consumption of oil and petroleum worldwide. But it is just one option.