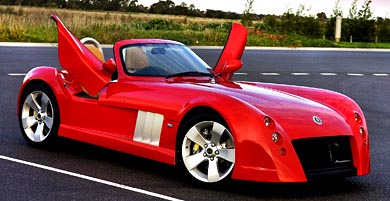 Leave up to the folks from Down Under to come up with such an exotic-looking roadster. It’s got a little retro-feel to it, but the mini Lambo-styled doors tell you that this car is all-new. The 2007 Elfin MS8 Streamliner roadster is the result of a collaborative effort between two prominent Australian manufacturing “icons” — Elfin Sports Cars and the Holden Design team — and by all indications, it’s pretty darn quick to boot.

Under the hood (or “bonnet”, I suppose), you’ll find a 5.7L V8 courtesy of Chevrolet (Holden is a fellow subsidiary of General Motors), capable of developing a fairly beefy 329 horsepower. They’ve kept the weight down to a mere 2315 pounds, and thus, the performance up.

The 2007 Elfin MS8 Streamliner should be available soon, with the asking price set at $91,064 USD. Personally, I think the car is a little too much of a phallic symbol (it remotely reminds me of the car from the “Ambiguously Gay Duo” skits on Saturday Night Live), but hey, what do I know?