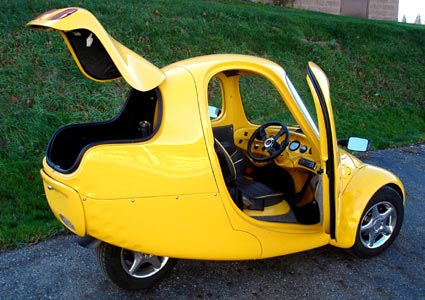 The new NmG electric car from Myers Motors is proof that being environmentally responsible isn’t always visually attractive. What I’m saying is that the car is pretty ugly. Still, it gives off no emissions, so it has something going for it.

This isn’t the car for long road trips. It has a range of just 30 miles, and it needs a charge of between 4 and 8 hours to accomplish that. It can top out at 70 miles per hour, though, so at least you can get to your nearby destination quickly. Quick enough, perhaps, that no one will see you driving it.

The NmG would be an ideal car for green commuters, but it doesn’t come cheap. You would have to throw down $25,000 to get one of your own. It’s just a one seater, so that’s a pretty high price to pay per passenger – way more than a bus pass. But who ever said that doing the right thing would be cheap?