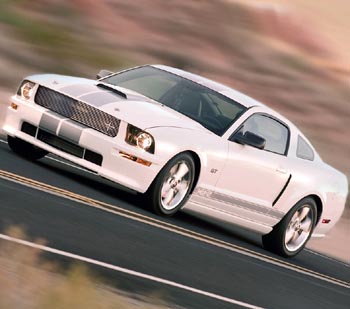 The Mustang and the Mustang-related vehicles are one of the few things that are going well for Ford these days, so it makes sense that they are riding those models for all that they are worth. The company has announced a new 2007 Ford Shelby GT which will be available in January of next year.

To imagine what it will look like and what it will run like, just take the Ford Mustang GT and the Ford Shelby GT500, and then think of something that would fit right in between the two. It will have a 4.6 liter engine spitting out 325 horsepower, which is just slightly better than the 300 of the Mustang GT, but well below the 500 of the Shelby GT500.

This car came about in a unique way. Ford created the Shelby GT-H exclusively for Hertz. It proved to be so popular when it was unveiled that dealers and customers asked for a version of their own. So here it is.