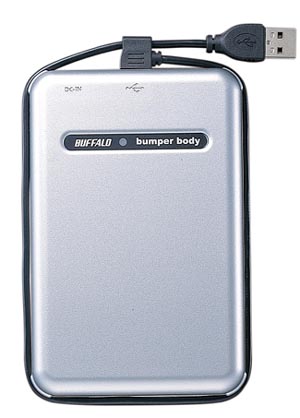 Let’s face it. Most people are clumsy and they’re going to drop things. That’s why they have leather cases for cell phones, jewel cases for CDs, and prominent bumpers for automobiles. Buffalo is out to protect their hard drives too, releasing a new set of portable storage devices that will be known as the Bumper Body line.

By the looks of things, it has an integrated USB cable that wraps around the unit when not in use (no tangles, no mess), but there is also a DC-in port, indicating that these hard drives — available in 40GB and 120GB varieties — may not be able to draw their power from the USB port. That’s unfortunate, and in a way, nullifies the convenience of the wraparound USB cord. Let’s hope I’m wrong on that front.

We’re still waiting on an announcement regarding pricing and a launch date, but as the Bumper Body line’s biggest selling point is its ability to withstand physical abuse, I wouldn’t expect Buffalo to overprice these things compared to those units with fingerprint readers and such.