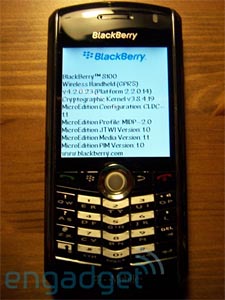 We only uncovered pictures of this thing a couple of days ago, but they’ve already given the phone a new name. What was once known as the BlackBerry Stealth and the 8100 has now been rechristened by the crew over at Research in Motion. The BlackBerry Pearl is going to be RIM’s first cameraphone, and it’s coming complete with the now requisite media playback capabilities.

Destined for T-Mobile, the BlackBerry Pearl features a 65k color 240 x 260 display, EDGE for data, 64MB of memory on-board, and microSD for expansion. And our suspicions were correct: there isn’t a scroll wheel on this thing. Instead, they have a trackball-like device in the center for navigation. You won’t find a full QWERTY keypad either, as they’ve thrown their SureType technology into the mix.

By all indications, the glossy black Pearl (not to be confused with the ship from Pirates of the Caribbean) will be hitting T-Mo kiosks on September 18th with a $199 price tag attached.