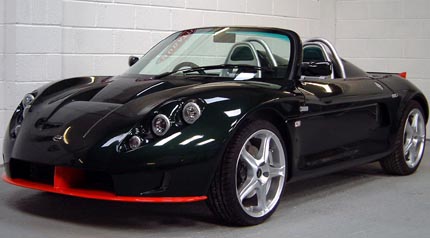 Two things can make a car incredibly fast. It can either have a beefy engine, or it can place a fairly mediocre powerplant into a lightweight package. Lucky for us, the R1 from Javan Sports Car of Britain is both feather-light (at a mere 1,430 pounds) and powerful.

That said, it doesn’t rock a V8 or even a V6. Instead, they’ve kept the package small with a 2.0-litre i-VTEC DOHC four-banger, good for 220hp at 8600rpm. That’s not quite in the 1001hp range of a Bugatti Veyron, but topping 200hp in such a lightweight package will surely provide a rather peppy ride. Zero to 60 takes a mere 3.6 seconds, with the quarter mile being clocked at 12.2 seconds.

This car looks like it would be an absolute blast to drive, and unlike countless other concept vehicles and would-be designs floating around the internet, the Javan R1 is actually heading into production. There are plans for launches in both the United Kingdom (with an affordable “on the road” price of £30,139) and the United States (for which they will prepare a left-hand-drive rendition).