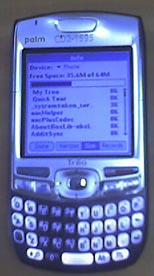 Feeling a little left out? All your friends are rocking a BlackBerry, Palm Treo, or similar huge-screened device, while you’re still squinting at that tiny cell phone display, devoid of any useful PIM applications. Well, if you’re looking to keep organized on the cheap, Palm is finally hearing your cries with the upcoming release of the Treo Nitro. And we’ve got the leaked picture.

The Treo line has traditionally been targeted at the higher end of the market and as such, has been priced accordingly. With the Treo Nitro, however, Palm hopes to capture a little more of the average Joe segment, and perhaps rise back into the prominence they enjoyed when PDAs first hit the market.

From what we can gather, the Nitro is most likely destined for Cingular, with the launch going down before Santa makes his rounds. No firm information about price, but it will certainly be cheaper than the Treo 700.