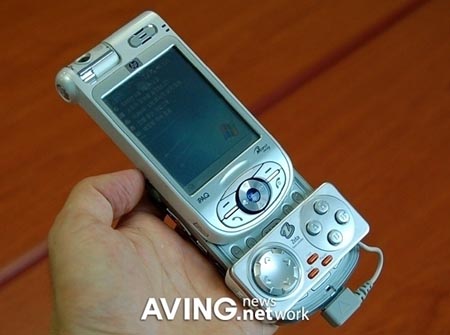 Got a PSP? Big deal. Picked up a DS Lite? Good for you. I’m just going to play with my smartphone instead, and with this new “Zeta” controller.

One of the (many) things that has prevented most people from taking playing video games on a Pocket PC smartphone seriously has been the lack of proper controls. These PDA phones were never really designed with gaming in mind, meant more for “useful” applications like e-mail and document editing.

The “Zeta” controller, however, brings a more standard-looking joypad to the mix, and it will work on the HP iPaq rw6100 and C8000 series, both running on MS Pocket PC 2003 SE.

A good controller is nothing without a vast library of attractive games, and while they aren’t developing games for smartphones with the same level of savvy as home consoles, the Zeta will feel right at home with the E2-SNES emulator with its 7 programmable buttons. Mario Kart, anyone?