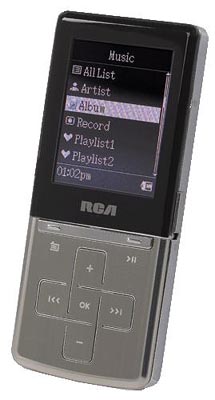 I think we’ve gotten far too accustomed to over-the-top company fanfare with the release of any given product these days, especially MP3 players that fit into the same segment as one of the lucrative music players from Apple. That’s why it’s a little surprising that a little gem like the M5002 from RCA is entering the marketplace so quietly, given that it should be a good — maybe even more affordable — competitor for the iPod nano.

As expected, the RCA M5002 digital audio player will blast out MP3 and WMA files, including the DRM’d stuff protected by Janus (Rhapsody, Napster To Go, AOL Music Now, etc.). Playing MOV, AVI, and MPEG videos on the 1.8-inch Multifunction Multi-Line TFT color display may require a bit of squinting, but it can be done as well.

Other notable features include FM radio (including the ability to record), line-in recording, and lyric display. To be available in 1GB and 2GB flavours, the RCA M5002 will come bundled in with a USB cable, earbuds, line-in cable, and even 100 free MP3 downloads from eMusic.com. RCA has yet to announce an official price point.