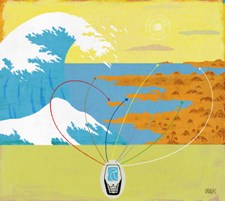 Spurred by recent tsunami warnings, an Indian software developer has come out with a multilingual messaging system designed to save lives.

A new warning system has been set up by weather watchers in the area, but the warnings are issued in English. The software, by Geneva Software Technologies in Bangalore, translates those English-only messages into a bushel full of other languages and sends them to any mobile phone in the world, independent of character sets. In all, 71 languages (including 14 Indian) are available for translation.

Despite what would seem to be a large memory footprint, the company insists that the software will fit on most SIM cards. And as long as a cell phone has Unicode capability, it can receive the messages.

That qualification might be the sticking point, actually. The Unicode option is a sometimes expensive add-on that puts such a picture message-capable phone out of reach for many poor residents of developing countries like the ones devastated by the Sumatra Tsunami in 2004.

Geneva already has one high-profile customer: India’s Ministry of Science and Technology has signed on. Other high-profile clients will surely follow.