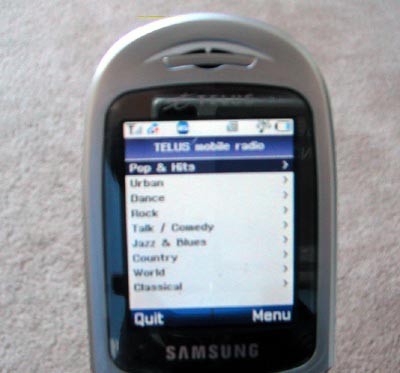 XM Satellite Radio isn’t reserved for those standalone units anymore. No longer are you restricted to carrying around an XM-only device to play in your car, while strolling down the street, or even at home… at least if you fall within Telus’ service area in Canada. I had the chance to try out their new Telus Mobile Radio service, powered by XM Canada, and while it was a worthwhile experience, the service isn’t without its faults.

It’s a Java Application
Telus Mobile Radio is currently available for use on two of Telus’ media-centric clamshells — the LG 8100 and the Samsung A950 — and this review is based on the latter, though I suspect the service is much the same on the LG handset (they plan on deploying XM Satellite Radio on other phones a little later).

For starters, you are not receiving a true XM Satellite receiver. Instead, you get your live streaming music by making use of the 1X and EV-DO high-speed networks provided by Telus. Because it is a Java application (that you can download directly from your phone), it does take time to load the program in order to browse the stations and play the music. Not a big deal, but it does delay your tune-enjoying experience.

Spotty Signal
Because you’re getting the streaming music via Telus’ high-speed network, you do need to have good reception in order to receive your tunes. I found that you need at least two bars of signal to get reasonable service; if you’re only sitting on one bar, it’s not uncommon for the music to stop completely, forcing you to attempt to reconnect (the phone even tells you that it’s lost the signal, asking if you’d like to “retry”).

Even when you think you’re getting the best of reception, oftentimes you get hit with “dead air” for as little as half-a-second to several seconds as the phone tries to pick up the stream again. This was probably the service’s weakest point, as it was quite frustrating to be listening to a song, only to have it cut out for a second or two.

Only 20 Stations
If you’re looking for a full XM Satellite Radio experience, you’re going to be sorely disappointed by Telus Mobile Radio. There are only 20 stations available to you, but they have included a little bit of everything to try to appease any musical (or entertainment) taste. Pop lovers can get their fix from Top 20 on 20, urbanites can get crunk with it on RAW-XL, rockers can mosh it up with The Verge, and so on and so forth. They even have XM Comedy, XM Pops (classical) and High Voltage – XL (talk/entertainment).

Interface
The interface in the Telus Mobile Radio Java application was clearly influenced by the omnipresent Apple iPod. As you can see from the provided video below, the list of station “categories”, as well as the listing of individual stations looks very much like the play-list found on the produce-named portable music player. That’s not a bad thing, as the interface is intuitive and works very well. Bear in mind that each station takes time to load as well.

Sound Quality
I was surprisingly impressed with both the sound quality and sound production of Telus Mobile Radio on the Samsung A950. Whether I was using the integrated stereo speakers or the included (wired) stereo earbuds, the music came out loud and clear. As expected, the bass was a little lacking (as with any cell phone with integrated stereo speakers), but I’m willing to overlook that. One shortcoming that I can’t overlook, however, is that you can’t just plug any old set of headphones into the provided jack to improve the sound output (usually a good set of headphones goes a long way). As it stands, it is quite adequate though, I must say.

Conclusion
All in all, I was impressed with Telus Mobile Radio, Powered by XM Canada. The concept is great and the sound quality was better than expected, but there are a few things that I have to re-iterate. Make sure you are somewhere that you can get a consistently strong signal, or else the stream will cut out abruptly and often. The pricing is also an issue. Like most other data-heavy applications, Telus Mobile Radio doesn’t come cheap: it’s a $15 add-on to any voice plan each month. Alternatively, you can opt for the Telus SPARK 25 feature bundle ($25/month), which comes with a few other tasty bits (like caller ID, voice mail, web browsing, instant messenger, and mobile TV). For more info, check out their official site here.