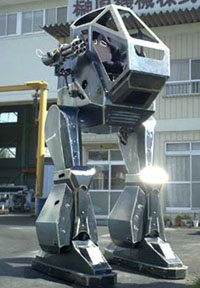 We’re getting a Star Wars vibe from this one, specifically on the ice planet of Hoth. This is something that mere mortals can operate, although it weighs almost a ton.

It’s the Land Walker, and it’s more than 10 feet tall. You sit in the cockpit, or the robot’s “brain.” You can control the movement of the robot’s feet (forward, backward, or sideways) and the built-in air guns, which shoot sponge bullets. Watch out, Luke Skywalker!

BTW, the price tag is a rather steep US$315,000. George Lucas could afford a few, but you might be limited to one (maybe).