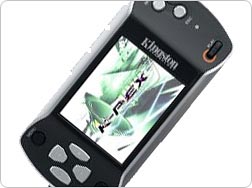 If you’re already manufacturing massive amounts of memory, why not throw it into a consumer-ready package? That must be the thinking behind the new K-PEX flash-based player coming out of the Kingston camp, a company that is best known for its memory card and RAM products.

Following in much the same line of thought as SanDisk (and their Sansa line) before it, Kingston wants a big piece of the MP3 and video-playing pie. In addition to the usual support of music files, the Kingston K-PEX tackles the elusive OGG format, as well as MPX video on its 2-inch screen. The form factor, however, screams out the need for a video game app.

If the on-board memory doesn’t suffice, you can always find additional storage through the integrated miniSD expansion slot. Available in 1GB ($129) and 2GB ($179) flavours, the Kingston K-PEX portable multimedia players should be ready for market soon.