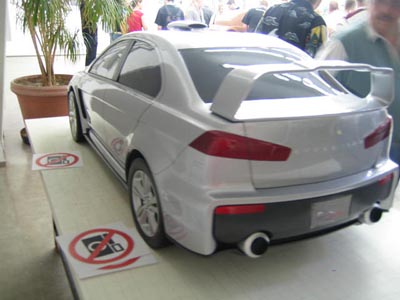 The World Rally Championship (WRC) is the proving ground for a lot of great vehicles, most (if not all) of which are 4WD or AWD. We’ve seen some fantastic Subarus, Peugeots, and Citroens come through the chute. Of course, we can’t get our hands on those versions of the vehicles, but we can drive street-legal renditions.

As we anxiously await the 2008 Mitsubishi Lancer Evolution, affectionately known as the Evo X (as in, the tenth Evo), any news is welcome and this latest set of pictures of a “rally edition” have enthusiasts drooling. Originally posted by ‘gnusmaS’ on the evolutionm.net forums, the scale model is being presented at the Mitsubishi Design Europe in Germany.

Sure, it’s not a “real” car, by any stretch of the imagination, but it certainly bears a striking resemblance to the Mitsubishi Concept-X that we’ve seen before. In this way, it could form the basis for the Mitsu Evo X, and a “rally” version at that.

On a side note, we should feel lucky to see these pictures, given the “no cameras” sign.