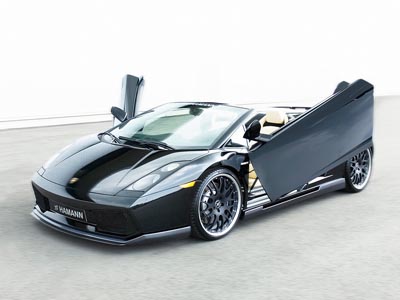 Hamann is well known in the automotive industry as a leader in aftermarket parts and supreme modifications. The German firm has taken their tinkering to an Italian supercar and the result is one crazy Lamborghini Gallardo Spyder.

The most noticeable change is that of the doors: the Gallardo is the only car in Lamborghini’s lineup with doors that open like a regular car. As such, the first change that the people at Hamann performed was to “bring the vertical door tradition back to this Lambo”. Several aerodynamic “enhancements” were put on as well, including a front spoiler, side sills, and a rear wing. New 19- and 20-inch wheels were also added on for good measure.

They threw on a four-pipe exhaust with sports metal catalysts. In tandem with a fairly simple ECU upgrade, the car now has 520hp (compared to the 490 it received from the factory).