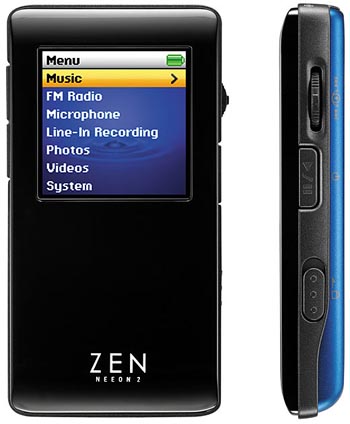 The benchmark has been set in the realm of small, thin MP3 players, especially when it comes to multi-gigabyte storage. As much as it pains Apple-haters to acknowledge, the iPod nano is one incredibly hot seller, much more popular than the countless other offerings on the market. Creative, however, isn’t content with playing second fiddle. They’re taking on the nano head-on with their new Zen Neeon 2.

To be available in the same capacities as the current iPod nano (no confirmation yet on the imminent release of the next-gen nano), the Zen Neeon 2 is about twice as thick as its competitor at 12.5mm, compared to the Steve Job’s 6.9mm. They’ve got some extra features to back up that girth, though. In addition to the usual music playing thing, the Zen Neeon 2 also does video, FM radio, and even voice recording through its built-in mic.