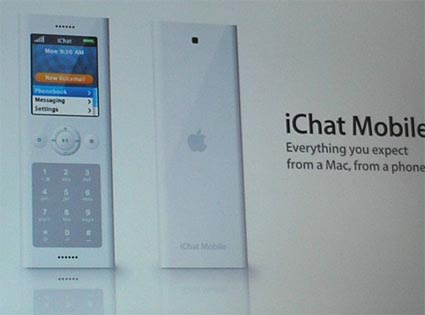 If you’re anything like me, you’re tired of all this wild speculation and conjecture and want to hear something straight from the horse’s mouth. While we’re still waiting on Stevie Jobs to confirm things one way or the other, you’re just going to have to bear with me as another image has popped up on the interweb. Here is yet another ad for the imminent Apple iPhone, except it’s being called the iChat Mobile. Looks pretty convincing, but who knows about these things anymore.

Clearly, this version of the iPhone was designed with music playing in mind: the controls for volume and track choosing are right there in the middle, just under the large color display. Looking at this rendering, though, it seems that the phone is a little too long for my tastes. That and it is noticeably missing a click wheel. But hey, the iChat Mobile does feature what looks like an iSight camera (but why is it on the back?).

C’mon, Apple, just unveil the bloody thing and put to an end all of these “could it be” pics. Okay, I’m done.