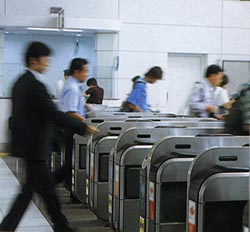 Remember late last week when we reported on vibration harvesters that could take everyday foot traffic and translate it into usable energy, providing enough juice to power a skyscraper for a day? It seems like East Japan Railway Company is working on something similar, except they’re harvesting the power generated by people walking through the turnstiles as they enter the subway station, translating it into usable electricity.

It follows with the “waste not, want not” philosophy. People are going to be walking through those gates anyhow, and as such, are creating a certain level of kinetic energy with each rotation of the turnstile. So, why not harness that energy? This environmentally friendly solution is currently undergoing testing, but it seems that the “vibrations and pressure that results when people walk through the gates” could provide for a fairly substantial amount of energy.

No word on when this will receive widespread adoption, of course, but they’re continuing the tests until August 11th, after which point we should get some results and have a better idea how effective this method really is.