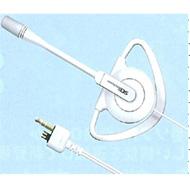 This might not be the most exciting news coming out of Nintendo — we’re still anxiously waiting on them to announce the Wii launch date and price point — but it certainly is a welcome announcement nonetheless. The good people at the video game company known for its pudgy plumber have just unveiled the first pictures of the official Nintendo DS Headset, designed to be used with the online voice chat functions in certain games.

Set for launch in Japan on September 14, the official Nintendo DS Headset will likely be marketed in tandem with the Pokemon line of titles which allow players to talk to each other through the game’s interface. A similar voice chat capability can be found in the hugely popular Metroid Prime Hunters. Fragging has never been so sweet.

No word on a European or North American launch at this time, but we do know that the Nintendo DS Headset will be priced at just 1,200¥ (about $10 USD) when it hits Japan next month.