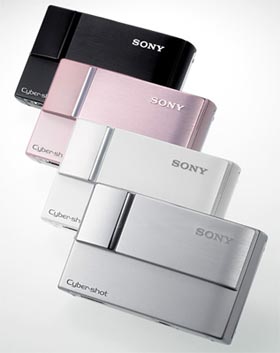 If you think that this “new” digital camera from Sony sounds awfully familiar, you’d be right, because the Cyber-Shot DSC-T10 doesn’t bring anything particularly novel into the mix. In fact, it’s not all that different from the T30.

Featuring a seven megapixel sensor, the Sony DSC-T10 comes with 3x optical zoom, ISO 1000, a good-sized 2.5-inch color display, and 56MB of internal memory, but of course you’ve heard this all before. The included NiMH battery is said to give 250 shots per charge, which isn’t bad, but it’s not jaw-droppingly good either.

As with previous models, Sony has opted for the slimmer form factor for the T10. Other notable specs include Super Steady Shot optical image stabilization, a Real Imaging Processor circuit, and the obligatory Memory Stick Duo (or PRO Duo) card slot.

We’re expecting Sony to start shipping out these bad boys — in silver, white, black, and pink — sometime later this month. The going price will be right around $400.