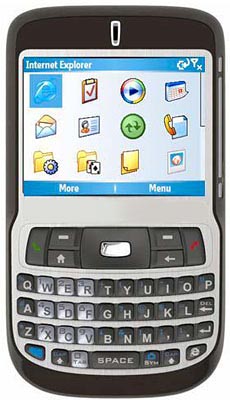 HTC may not be particularly well known in North America, but they’re the company behind a lot of Windows Mobile-powered smartphones on the market, including a good number of self-branded handsets from Cingular and T-Mobile. Now the Taiwan-based handset maker has its eyes set on challenging the BlackBerry devices and Moto Q’s of the world with the all-new HTC Excalibur.

It is said that this smartphone has been in the works for quite some time now, but it is only recently that pictures have started popping up on the internet. Specs are a little slim at this point, but as you can tell from the pic, it comes with a full QWERTY keyboard and naturally runs on WinMo5. Word is that it does quad-band GSM and Wi-Fi as well.

What will really set the Excalibur apart from the competition, though, is its unique touch-sensitive “jog strip” that replaces the ubiquitous jog wheel we find on the device offered by Research in Motion. You can see this clever strip just to the right of the vibrant better-than-QVGA display.