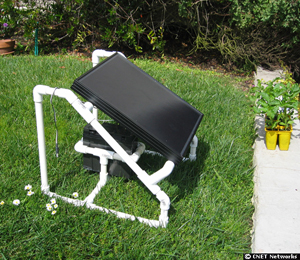 Now this is wireless.

Two high-tech guys from Sun Microsystems are now the brains behind Green Wi-Fi, a system of solar-paneled Wi-Fi networks aimed at bringing Internet access to schools in developing countries. The system seems so elementary, and yet certain obstacles remain in its path, including funding and undependable weather.

A 10-watt solar panel gathers power from the sun, then transfer that power to a battery that powers a router, which transfers Wi-Fi signals on the 802.11b/g network standard.

A prototype has been tested (in San Francisco, not in a developing country yet) and been found to succeed. Initial funding has come in part from the One Laptop Per Child (OLPC) initiative.

To make sure that the router keeps a constant flow of power going, the developers set it up so that it regulates power usage according to how much sunlight is hitting the solar panel and how charge is left on the battery. In periods of low light or power, the router allows limited usage, such as for only emails and not video downloads. Since the network is designed to be used primarily by schools, the router can be set up so it powers down at a certain time of day and recharges for the next school day.

The solar panel was designed to survive hail storms, but monsoons or a long period of days without sunlight might test its limits. The battery, which is encased in a protective gel, was built for heavy-duty use and designed to allow many recharges.

The pilot project will begin later this month, in northern India.