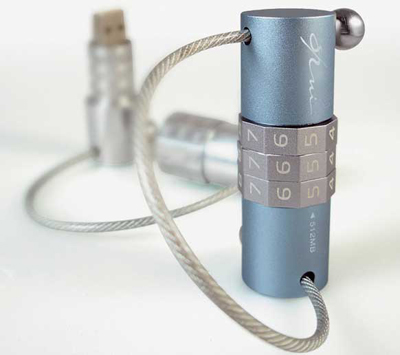 You’d think with a name like 007 that a device would be some sort of superfly gadget that only a guy named Q could fully explain. Yet here is Duck Image, releasing a USB flash drive that is nothing more than a souped-up combination lock protection system.

As combination locks go, however, it’s a darn good one. It’s dust-proof and waterproof. The cable that connects the flash drive to the lock is reinforced steel, which will repel all but the most determined bolt cutter-wielding data thieves.

The device has a dual level of security: if a thief somehow gets past the bike-lock three-digit combo, he or she would still have to type in the password that is associated with the flash drive itself.

You can see from the photo that this is the 512MB model. So far, this is your only option. Price has yet to be announced.