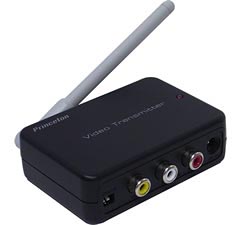 Although they are quick to point out its compatability with the iPod Video, the PCK-UAV from Princeton Japan can wirelessly transmit video from any device that has standard RCA outputs. As you can probably figure out from the supplied picture, you simply plug the appropriate inputs into the yellow, white, and red jacks that we’ve all seen on the back of TVs, VCRs, and DVD players, and you’re all set.

Well, not completely. Because the Princeton PCK-UAV operates on the UHF band, it’ll take a little bit of tinkering and tuning to get your television to pick up the signal, but when you do, you can enjoy your video on a nice big TV, instead of squinting at that tiny iPod display.

The 65g Princeton PCK-UAV should be dropping in Japan any day now (they’re saying “mid-August”). Retail price has been set at 8000 Yen, or about $70.