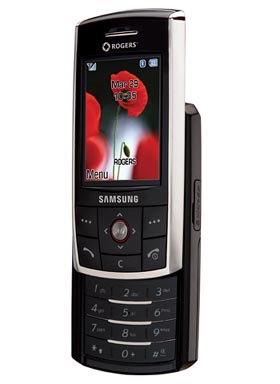 The press release must have slipped under the radar, but for us lowly Canadians, this is pretty big news. Rogers Wireless, the leading GSM service provider north of the 49th parallel, has just added the Samsung D807 to its lineup. This follows the recent addition of the Samsung D606, a tri-band version of the popular D600 musicphone.

The Samsung D807 seems to do everything that Samsung is known to do. It’s a slider phone for starters, and at 15mm thick, it’s pretty slim as well. The quad-band D807 comes with an integrated 1.3 megapixel camera, a built-in MP3 player, and 17MB of memory. Expansion comes by way of microSD, and Rogers is getting your started by bundling in a 512MB card.

Other notable specs include Bluetooth, EDGE, speakerphone, and an included USB cable for all your uploading and downloading needs. The Samsung D807 is available now through your local Rogers Wireless kiosk for $200 with a three-year contract.