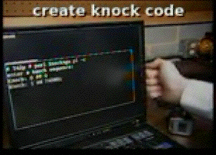 “It’s your user. I want you to run the multiple spreadsheet routine now.”

That scenario might not be too far from the truth if a group of software developers has their way. They’re working under the IBM umbrella in North Carolina, and they say they have found a way for computer users to control their machines by tapping on the casing.

The software turns the hard drive accelerometer into a motion sensor, responding to vibrations and translating that response into computer code to perform a certain function or set of functions. In one video demonstration, the lead developer on the team taps on the side of a laptop and watches as applications launch and then quit.

The software has the working codename “Knockage” and can be configured to perform a variety of functions, including the mundane locking and unlocking of the computer and the sublime moving from one track to the next on an embedded music player.

The movement sensor has also been put to good use in tests of laptops that were dropped. The hard drive sensed the sudden change in position and acceleration and locked its read/write head, effectively preventing any data loss.