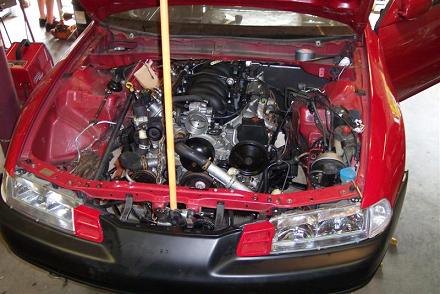 Oh those crazy guys at Honda-tech are at it again. The site is home to many racing enthusiasts — owners of Integras, Civics, and S2000s are aplenty — but a user that goes by “preluderacer” has done the unthinkable. The 21-year-old tuner took his 1993 Honda Prelude, swapped out some of its bits and bolts, and effectively transformed the coupe into a rear-wheel-drive vehicle.

Not only did he make the change to the drivetrain, he performed a full engine swap as well, replacing the stock H22 with the GM LS1. The engine was mated with a T56 six-speed manual transmission, hidden in a custom fabricated tunnel. Other modifications include an RX7-based independent rear suspension setup, and relocation of the steering rack using parts from a Cavalier and fifth-generation Prelude.

Quite a lot of work, but “preluderacer” can now say that his Honda is about as unique as it gets, and we’re not talking lambo doors and undercar neons.