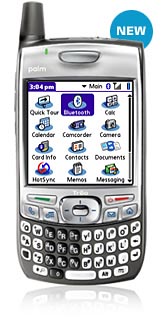 This may sound a little confusing at first, but word is that Palm will stop paying royalties to PalmSource — developers of the Palm Operating System — on December 2nd, and as such, they will no longer be licensed to use the Palm OS after that date.

We’ve already started to see the migration to a Windows environment with the Treo 700w, and everything seems to be pointing toward a stronger relationship with Microsoft. By partnering up with Microsoft, Palm may be able to better compete with RIM and their ubiquitous BlackBerry device.

It’s possible that they will continue with the dual OS configuration that they have today, offering both Palm OS and Windows-based handhelds (e.g., the 700p and 700w).