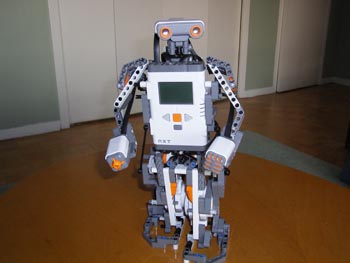 Last week I finally got a hold of the new Lego Mindstorms NXT after months of waiting. Practically as soon as I got in the door, I dove right into the packaging. I was actually quite stunned at the number and complexity of the parts that came with the system. I’m a Mindstorms newbie, and I’m not afraid to admit it. Never really being that big into the whole “robotics” scene, and seeing as how my amount of Lego playtime dropping exponentially since the age of about 9 or 10, when I first heard about Mindstorms a few years back, it didn’t immediately pique my interest. That all changed when I heard how Lego had really embraced the community that had formed around the first few iterations.

After reading about that, I immediately went and searched out what these guys had done, and frankly I was very impressed. Multitudes of robotic creations had been brought to life by these “fans” and many had even gone so far as to mod the components so that they could do even more than originally thought possible.

What Lego did next was impressive. They went and got together some of the top people in the Mindstorms communities, and brought them in to help design the next iteration, NXT. Let’s just say that if it weren’t for these guys (which Lego is calling their MDP, Mindstorms Developer Program), Mindstorms wouldn’t be anywhere as advanced this time around as it could have been.

When all was said and done, NXT was light-years ahead of the previous versions. Included in the kit you can pick up for $249.99 ($349.99 CAD) are 3 servos (motors), almost 600 pieces, and an assortment of sensors that react to light, sound, touch, and even one for measuring your presence via a pair of ultra-sonic “eyes”.

The models assemble quite easily, and the instructions for the examples are very easy to follow, but the complexity of the models themselves left me feeling sheepishly under-skilled to go and create my own once I had exhausted all the options.

Besides thinking that I’d potentially flunk out of robot-school once I tried to build my own, I also had a few problems actually programming my robots once I had completed them. The demo programs worked easily enough, but when I began plunking commands together myself I ran into a few speed bumps. First, you apparently need a degree to use the application. Yes, there are help dialogues to guide you through the process, but I was overwhelmed at the sheer possibilities that were available in the application. Heck, why on earth would I want my robot to start doing mathematical equations instead of walking around in awkward 360 degree circles (as that’s what I obviously excelled at telling it to do)?

Clearly I was a little over my head, but that doesn’t mean you will be. But, there are some places that I ran into problems, and I don’t think they were due to my own lack of imagination, rationalization or implementation. For one, the NXT unit, while being extremely advanced, only has the capacity for 256 KB of user storage memory. More than once I received “out of memory” errors while uploading my ridiculously uninspired programs. I had to resort to ripping out all the jazzy sound effects I had plopped into them so that they would work.

Next, one of the innovations that NXT has over the original is the use of either USB or Bluetooth to communicate back to the PC. The USB worked flawlessly, but, although the process for pairing Bluetooth devices is usually quite a trivial and painless one in most other cases, to get the NXT and my PC up and running took a little coaxing, and maybe just a smattering of “encouraging” words. In the end I did get it to work, but it seems needlessly complicated. 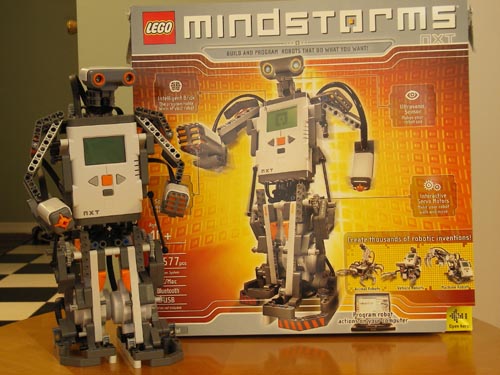 So, did those robo-fan-boys do Lego a favour in helping them design the NXT? Undoubtedly. But, if you’re not highly inclined to tinker and work out problems and designs for hours on end, you may feel left a little high and dry as I was once you run out of demo models to build and program. Also, you might have a hard time passing this off to a 10 year old, as Lego indicates that Mindstorms is for those aged 10+.

Lego Mindstorms NXT is definitely quite an interesting and thought inspiring “toy”… if it can even be called that. And to top it off, there are several additions to this base set coming down the pipe in the next few months that’ll surely add to the complexity that can be derived from it. So overall, if you’re a fan of the previous sets, and/or a robotics nut, then this system will definitely keep you busy… just don’t go in hoping you’re going to program your “Alpha Rex” to go fetch you a beer a few hours after you open the package. I made that mistake. I’m still thirsty.

Lego Mindstorms NXT will be available at a multitude of retailers starting August 1st, 2006.