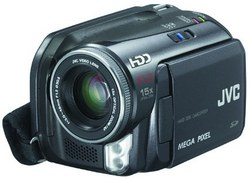 Despite the growing popularity and utility of microdrives, JVC is apparently going to stop using them in camcorders. This includes, of course, the hot-selling and relatively new Everio models.

JVC is said to be going hard toward hard disks in its new models of camcorder, favoring higher (and pricier) models of storage over more portable (and cheaper) alternatives. That’s all well and good as long as you want to keep those hours of video on the embedded hard disk and look at them using only your camcorder. But what if you wanted to share them with a friend or colleague? You could not, as you can now, remove the microdrive and just hand it over. Yes, you get more storage space; but you also get less function for use.

Well, JVC didn’t ask our opinion, but they surely did customer surveys and acted in part on those. It’s not really a matter of debate, since microdrive models are being marketed in a fire sale in order to make way for the new, hard disk-based models.