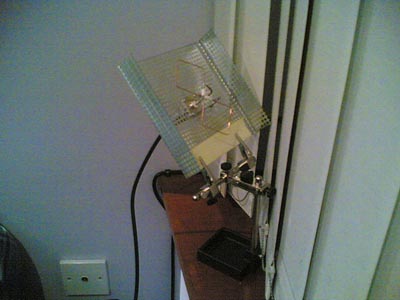 A blogger named “Graeme” lives in a complex over in the UK where he can catch a cell phone signal in his living room, but never in his bedroom at the back of the building (which faces a courtyard). Bent on being able to use his handset in places other than his living room, he devised an antenna that, in effect, provided him with cell phone reception in an otherwise unreachable concrete jungle.

Based on his research with where his closest T-Mobile base station was, he calculated the distance and angle that the signal would come from. His goal was to get a UMTS (3G) signal rather than the usual GSM reception for a number of reasons, including improving the battery efficiency on his Nokia E61.

After some tinkering with WiFi-based (2.4GHz) components, Graeme managed to consistently get one bar of UMTS (2.1GHz) and two bars of GSM. Check out the link for a more detailed explanation of how he “got mobile phone reception where there was no signal.”