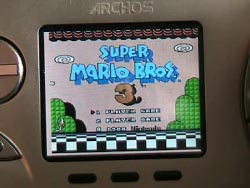 I’ve been playing video games for as long as I can remember, and many of my fondest memories go back to Nintendo’s first home entertainment system, affectionately known as the NES. While I still have that beige brick kicking around in my basement, it doesn’t quite work as well as it used to. As such, when I feel like getting my old school gaming on, I’m better off looking for an emulator.

Sure, there’s the NES Classics series available for the Game Boy Advance, but if you happen to be rocking the Archos Gmini 400 PMP, you can now attack those retro hits with the best of them, using the aoNES emulator.

The people at ArchOpen.org have ported over the GP32 Nintendo Entertainment System emulator over to the 400 (but not the 402), throwing in support for autofire, frame-skipping, and state saving (no need to reach save points). They do note, though, that you need firmware version 2.1.xx for the aoNES emulator to work.