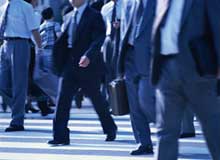 So walking is good for you and the electricity grid? Well, that’s the conclusion of a group of British engineers, who are working on a prototype of a device that translate footsteps and train travel into useful energy.

Welcome to the world of the vibration harvesters. Their signature device is optimistically called the hydraulic-powered heel-strike, and they want to install them in the floors of busy public places: subway stations, bus stations, and perhaps any old street in New York City or London.

A statistic trotted out by the British engineers is that a Tube station in London has 20,000 commuters an hour during peak usage. Take that 20,000, multiply it by the 5 to 7 watts a person, and you can power a skyscraper for a day.

The engineers are also working on a device to collect vibrations created by trains, planes, and automobiles. All of these devices are expected to be completed by the end of the year.