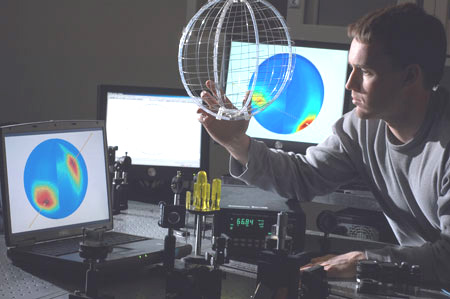 How would you like to have a digital camera that didn’t need a lens? Researchers at MIT are working on a project that could have that as an end result.

What they have come up is a transparent web of semiconducting fibers that can give you a constant view of your surroundings yet remain invisible. A transparent polymer surrounds the semiconducting glass core and its wire encasements, which act as both positive and negative electrodes. Light that hits the core changes an electrical current in the fiber, resulting in a signal along the mesh that identifies the source of the light and projects an image based on that that light.

How is this like a camera? Well, one of the experiments these scientists did was to simulate your old point-and-shoot friend by passing two flat, parallel fiber grids. The resulting stream of light was a bit blurry, which you would expect because there’s no blurry-image compensator like those found in most digital picture takers today. But never fear, the scientists wrote algorithms to bypass this problem, tracking the light to its source and reconstructing an image that lost all traces of blurriness. Now that’s a camera.

The scientists stress that these meshes aren’t difficult or expensive to make, and could cover large areas like the outside of a building. Practical applications include helping mobile medical professionals detect heat and, therefore, find wounds more quickly and assisting soldiers avoid laser-sighted targets thrown at them by snipers. Computer-game applications have also been bandied about, as well as everyday applications involving walking and driving. More work is needed to achieve these breakthroughs, but the scientists are confident that they can measure up to those goals of success.